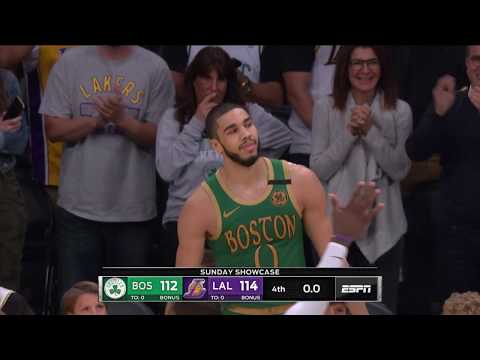 LeBron speaks out on his clutch shot vs. Celtics

Los Angeles Lakers superstar LeBron James was feeling pretty good on Sunday after his team eked out a 114-112 victory over rivals Boston Celtics at Staples Center.

Apart from helping his team notched its fifth straight win, The King nailed the biggest shot of the ball game in the dying seconds of the final period.

With the Lakers down by one with less than 40 ticks remaining, James made his move in the low block against Jaylen Brown. After deceiving his defender with a shoulder fake, James executed a picturesque fadeaway jumper that hit nothing but nylon to give the home team back the lead.

The shot put the Lakers on the driver seat and gave his team enough cushion to seal the win.

James, 35, took to Instagram shortly after the game to talk about his clutch shot. James finished with 29 points, eight rebounds, and nine dimes in 35 minutes.

“Absolutely LIVE for those MOMENTS!! I don’t always come out as I would like but I’ll be right there again and again and again when it’s presents itself EVERY SINGLE TIME succeed or fail,” he wrote.

As great as LeBron James has been throughout his historic 17-year career, the Lakers point forward has taken flak in the past for failing to hit big-time shots in the clutch. The pass-first James has often deferred to his teammates on such occasions, while he has also missed quite a few shots when the game is on the line.

The 6-foot-8 megastar has even missed some crucial free throws down the stretch.

Aside from addressing his game-winner, James also praised Celtics’ forward Jayson Tatum in a separate post. Tatum tied his career-best 41 points in a losing effort.